Paula White urges her followers to give “first fruits”offerings  [translation “give me your monthly, daily or weekly paycheck] most likely to pay off her credit card debts from overspending on lavish Christmas gifts!

She asserted that “2018 is a year of life and deliverance from struggle [and] it begins right now with first fruits.” White noted that part of the Hebrew word for 18 means “alive” or “living.”

“We are demanding life to your purpose,” she declared. “And with obedience to this first fruits instruction, which is putting God first now, your purpose, your year, your prosperity, and your power will have life and be resurrected!”

“When you apply this, everything comes in divine alignment for His plan and promises for you. When you don’t honor it, whether through ignorance or direct disobedience, there are consequences,” White also said.

She basically uses a scare tactic by saying,”there are “consequences” for those who don’t do so out of “ignorance or direct disobedience.” This behavior should be illegal and is nothing less than fleecing ignorant religious indoctrinated people! These people are literally being BRAINWASHED in to giving their hard earned cash to this woman! The only “consequences” in not giving this charlatan your money is that YOU’LL HAVE MONEY IN YOUR POCKET!   She noted that some of her partners “sow a month’s pay, a week’s pay, [or] a day’s pay,”—whatever is their best. White stated that the offering differs from a tithe—or 10 percent—because it is the whole of the first. Now that she’s been publicly slammed for her apparent get rich quick scheme, her damage control team is cleaning up her mess by stating,” her comments were taken out of context,” NO THEY WEREN’T! This is what these religious parasites say consistently to their hypnotized followers year after year; there are poor people who have given to her for YEARS and the only one who is rich is her!

“As you remember the Lord your God, according to Deuteronomy 8:18, through your first fruits offering, He gives you the power to acquire wealth to establish His covenant,” she wrote in a post on her website, accompanied by a YouTube video.

“Each January, I put God first and honor Him with the first of our substance by sowing a first fruits offering of one month’s pay. That is a big sacrifice, but it is a seed for the harvest I am believing for in the coming year,” White outlined.

What “seed”? Luke 8:11 CLEARLY states that the seed is the word of God- NOT MONEY!

Paula quoted Deuteronomy 8:18  but God was talking to the JEWS – NOT CHRISTIANS, and Deuteronomy 8:18 has ABSOLUTELY NOTHING to do with giving money! Paula White is using the Old Testament [which she claims to not be under] to support her stealing and using Hebrew numerology meanings to trick people.  When will you Christians WAKE UP and come out of Babylon? 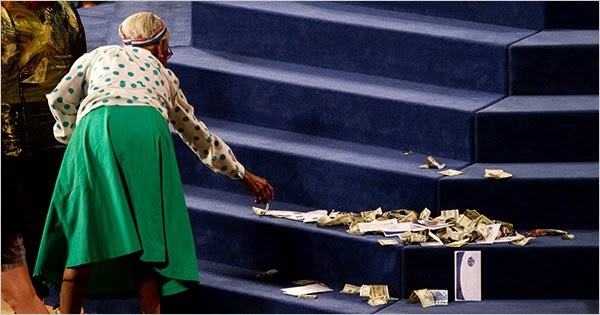 Paula White needs to REPENT! And if her repentance is sincere she will not remarry when her current marriage ends in divorce.  God will not change His law of marriage and divorce to favor Paula White or anyone else.