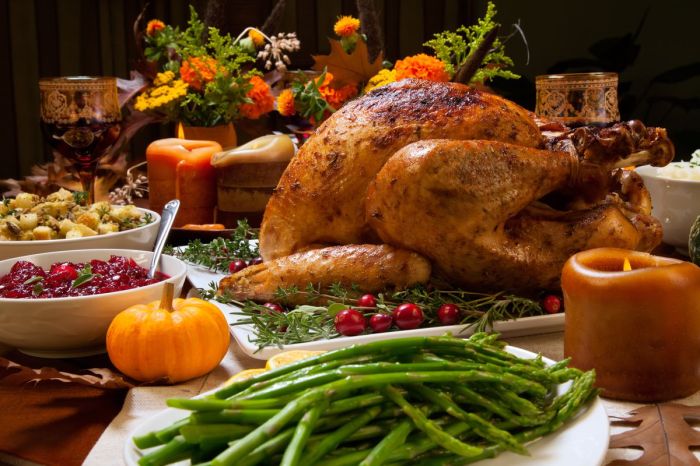 Colossians 2:8 – Beware lest any man spoil you through philosophy and vain deceit, after the tradition of men, after the rudiments of the world, and not after Christ.

Thanksgiving is America’s preeminent day and is celebrated every year on the fourth Thursday in the month of November. Its origin can be traced back to the 16th century when the first thanksgiving dinner is said to have taken place. Have you ever wondered why a big feast is customary in celebrating the holiday called Thanksgiving? Most likely, you haven’t, which is what’s wrong with this society, especially Christians. We participate BLINDLY in holidays and ceremonies without questioning their origins because we’ve been brainwashed to celebrate them. We have been lied to about the true history of holidays in hopes to BURY THE TRUTH because this holiday as well as all other holidays have evil histories and are used to generate money and the ignorance of people is needed to do this. Some Christians have heard the truth but will excuse celebrating Thanksgiving by saying things like, “I’ve been celebrating it my whole life and I’m not stopping now” or “I’m celebrating it just to show God that I’m thankful”, “God knows my heart”, “Since I didn’t know the history of celebrating it, God won’t judge me for doing it”, etc…

Westerners have been taught to believe that the Pilgrims and “the Indians” harmoniously shared the “first Thanksgiving” meal in 1621, the “Indians” referred to so generically are the ancestors of the contemporary members of the Wampanoag Nation. As the story commonly goes, the Pilgrims who sailed from England on the Mayflower and landed at what became Plymouth, Massachusetts, in 1620 had a good harvest the next year.  So Plymouth Gov. William Bradford organized a feast to celebrate the harvest and invited a group of “Native American allies, including the Wampanoag chief Massasoit” to the party. The feast lasted three days and, according to chronicler Edward Winslow, Bradford sent four men on a “fowling mission” to prepare for the feast and the Wampanoag guests brought five deer to the party. And ever since then, the story goes, Americans have celebrated Thanksgiving on the fourth Thursday of November.  THAT’S THE LIE THAT AMERICANS HAVE BEEN BRAINWASHED TO BELIEVE! 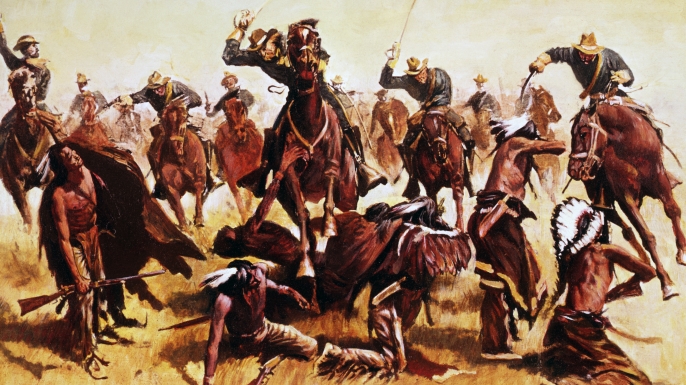 Their skin was dark. Their languages were foreign. Their land was beautiful and their world views and spiritual beliefs were beyond most white men’s comprehension.

According to historian Susan Bates (Native American History Teacher) The story began in 1614 when a band of English explorers sailed home to  England with a ship full of Patuxet Indians bound for slavery. They left behind smallpox which virtually wiped out those who had escaped.  By the time the Pilgrims arrived in Massachusetts Bay they found only one living Patuxet Indian, a man named Squanto who had survived slavery in England and knew their language.  He taught them to grow corn and to fish, and negotiated a peace treaty between the Pilgrims and the Wampanoag Nation. At the end of their first year, the Pilgrims held a great feast honoring Squanto and the Wampanoags. 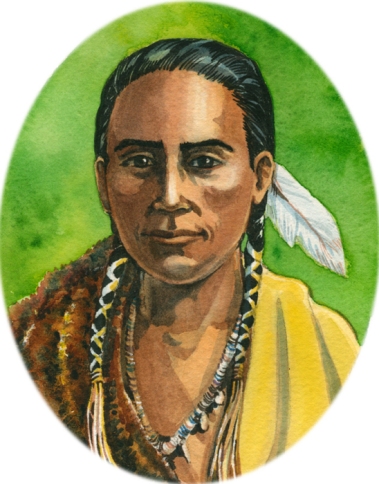 But as word spread in England about the paradise to be found in the new world, religious zealots called Puritans began arriving by the boat load. Finding no fences around the land, they considered it to be in the public domain. Joined by other British settlers, they seized land, capturing strong young Natives for slaves and killing the rest.  But the Pequot Nation had not agreed to the peace treaty Squanto had negotiated and they fought back. The Pequot War was one of the bloodiest Indian wars ever fought. 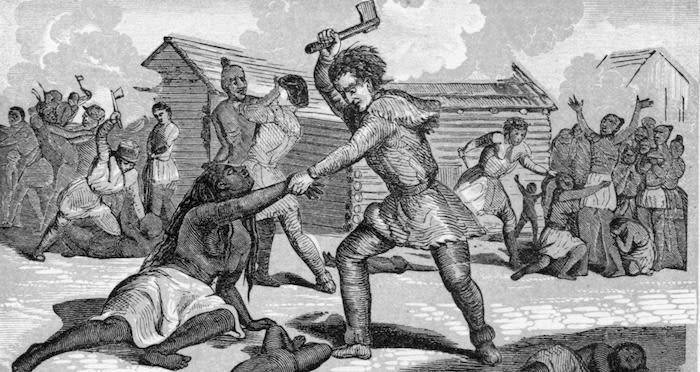 The Pequot War was one of the bloodiest Indian wars ever fought.

In 1637 near present day Groton, Connecticut, over 700 men, women and children of the Pequot Tribe had gathered for their annual Green Corn Festival which is our Thanksgiving celebration. In the predawn hours the sleeping Indians were surrounded by English and Dutch mercenaries who ordered them to come outside.  Those who came out were shot or clubbed to death while the terrified women and children who huddled inside the longhouse were burned alive. The next day the governor of the Massachusetts Bay Colony declared “A Day Of Thanksgiving” because 700 unarmed men, women and children had been murdered. 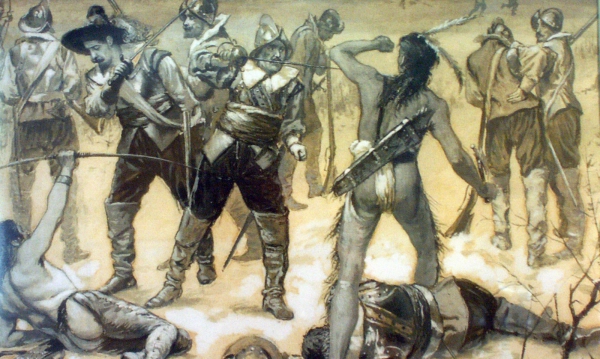 Cheered by their “victory”, the brave colonists and their Indian allies attacked village after village. Women and children over 14 were sold into slavery while the rest were murdered.  Boats loaded with a many as 500 slaves regularly left the ports of New England. Bounties were paid for Indian scalps to encourage as many deaths as possible.

Following an especially successful raid against the Pequot in what is now  Stamford, Connecticut, the churches announced a second day of “thanksgiving” to celebrate victory over the heathen savages.  During the feasting, the hacked off heads of Natives were kicked through the streets like soccer balls.  Even the friendly Wampanoag did not escape the madness. Their chief was beheaded, and his head impaled on a pole in Plymouth, Massachusetts — where it remained on display for 24 years. 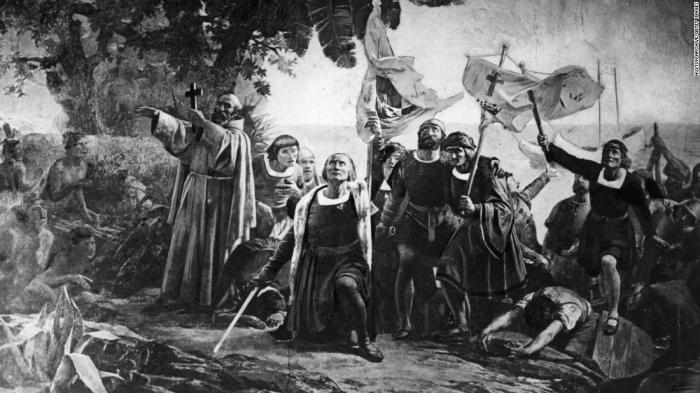 (CNN) When Europeans arrived in the Americas, they caused so much death and disease that it changed the global climate, a new study finds.
European settlers killed 56 million indigenous people over about 100 years in South, Central and North America, causing large swaths of farmland to be abandoned and reforested, researchers at University College London, or UCL, estimate. The increase in trees and vegetation across an area the size of France resulted in a massive decrease in carbon dioxide (CO2) in the atmosphere, according to the study

The killings became more and more frenzied, with days of thanksgiving feasts being held after each successful massacre. George Washington finally suggested that only one day of Thanksgiving per year be set aside instead of celebrating each and every massacre. Later Abraham Lincoln decreed Thanksgiving Day to be a legal national holiday during the Civil War — on the same day he ordered troops to march against the starving Sioux in Minnesota. 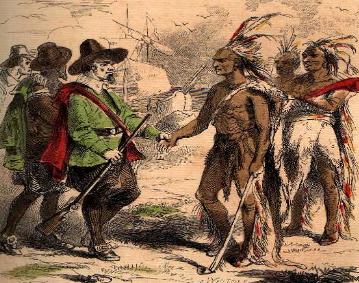 This is the LIE that Westerners are taught in history class and brainwashed to believe. The Indians didn’t shake hands with the British, the Indians were tortured by the British, and to celebrate each successful massacre, the British had a “Thanksgiving” feast.

This story doesn’t have quite the same fuzzy feelings associated with it as the one where the Indians and Pilgrims are all sitting down together at the big feast.  But we need to learn our true history so it won’t ever be repeated.  This  Thanksgiving, when you gather with your loved ones to Thank God for all your blessings, think about those people who only wanted to live their lives and raise their families but were instead massacred, enslaved and raped by the British. They, also took time out to say “thank you” to Creator for all their blessings. 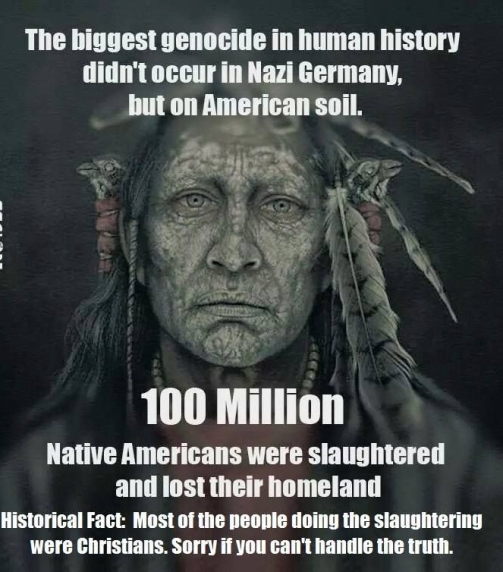 Matthew 15:3 – But he answered and said unto them, Why do ye also transgress the commandment of God by your tradition?

Ephesians 5:20 – Giving thanks always for all things unto God and the Father in the name of our Lord Jesus Christ;

1 Chronicles 29:13 – Now therefore, our God, we thank thee, and praise thy glorious name.

1 Peter 1:17-19 And if you call on the Father, who without partiality judges according to each one’s work, conduct yourselves throughout the time of your stay here in fear; knowing that you were not redeemed with corruptible things, like silver or gold, from your aimless conduct received by tradition from your fathers, but with the precious blood of Christ, as of a lamb without blemish and without spot.

2 Corinthians 6:17 Wherefore come out from among them, and be ye separate, saith the Lord, and touch not the unclean thing; and I will receive you

Jeremiah 10 – DON’T LEARN THE WAY OF THE GENTILES!

We should be thankful EVERYDAY and give God thanks EVERYDAY according to the scriptures. God never told us to set aside one day and call it Thanksgiving, that is a tradition of men- Abraham Lincoln made that declaration, not God.

Colossians 2:22-23
which all concern things which perish with the using—according to the commandments and doctrines of men? These things indeed have an appearance of wisdom in self-imposed religion, false humility, and neglect of the body, but are of no value against the indulgence of the flesh.