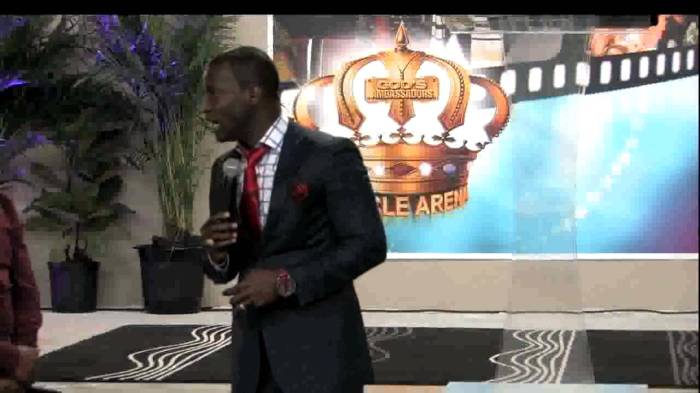 A Toronto Charlatan Pastor (originally from Ghana) who fathered a child with one of his parishioners reportedly told her that “God would strike her down if she gave birth to his child,” this is proof that Danso is not hearing from God and is a magician and not a prophet of God.

As first reported by the Toronto Star, Martin Kofi Danso, the pastor of Miracle Arena For All Nations church in Toronto,Canada foolishly filed a lawsuit last month against one of his followers who revealed that he was the father of her 6 month old child.  Danso, who boasts of being a “prophet,” describes himself as “an author, gospel artist, life coach, a worshiper and a businessman with TV and radio programs across Canada.” No one actually ever heard of him until he married his wife (who had a legitimate public presence in Canada prior to meeting Danso) moved to Canada and took the spotlight off of his wife and put it on himself, he personally has a “from rags to riches” type story.  He is an arrogant, selfish, pompass, joke of a preacher. Just listen to this idiot:

In the lawsuit that he filed against Chris-Ann Bartley, he claimed the two never had sex, requested a paternity test, and stated this was a scheme to get him “to pay child support for the child who was fathered by another man.” Danso argued and swore under oath that he did not  in any way have “sexual relations” with Bartley. After filing the suit he requested a publicity ban be placed on the lawsuit because it becoming public could hurt his career [stop/reduce those tithes and offerings from coming in].  The Star reports that at first, a judge agreed with Danso writing that if “his evidence he was never intimate with the respondent is true, these losses would not be the natural consequences of his actions, but rather, an unfair and devastating injustice.” Well, they tested the child and it turned out that there is a 99.999996 percent chance that the boy, who is now six months old, is his. Danso—who again requested the paternity test—then changed his story saying that he was seduced by Bartley, how ludicrous!

Does he REALLY need a photo of himself “in the spirit” or “praying” or maybe he’s crying because he knew that he would be exposed.

However, Ontario Superior Court Justice Fred Myers, who was ruling on the request of a publication ban, shot down the ban. Myers stated that Bartley could provide evidence that disputes Danso’s claim and proves they had a consensual affair from the fall of 2014 until May of last year—part of that evidence is the claim that he instructed her to abort her child.  He actually told his mistress to KILL A BABY- their love child, HIS OWN SEED!!!!

“Ms Bartley’s evidence is that when she approached Mr Danso to tell him that she was pregnant, he asked her to have an abortion. When she declined, she claims that he told her that “the Lord showed him if I have the child I would die,” Myers wrote in his ruling, according to the Star.

Myers understandably was mystified why Danso would go forward with this lawsuit if he was fully aware that he had hooked up with Bartley.

It’s no surprise why Danso attempted to get a publication ban. By all accounts, it appears Danso’s gig as a prophet seems to be a lucrative one. The website for the church features a wide online shop selling CD sermons, hoodies, and something called prophetic anointing oil which costs $50 and Danso jets around the world for his sermons, walks around in designer skinny suits and boasts of his success and how much he fasts and prays. He can now add pulpit sexual predator to his list of titles! He’s going to need those tithes and offerings now to pay his child support- with his net worth in the millions it will be a costly payout that no doubt his blind congregation will help him pay.  Poor kid, his mother will have to tell him one day that his father wanted her to kill him by having an abortion so that his wife wouldn’t learn of his affair and his reputation wouldn’t be tarnished. These false prophets would throw their own mothers under the bus to protect their reputations, I feel badly for his wife and children.

I wouldn’t be surprised if other women come forward with allegations of a sexual relationship with this He-goat. If women would file lawsuits against these predators, they may stop using the church as a means to find sex-mates, but in this case Danso filed his own lawsuit- HE LAID A TRAP FOR SOMEONE AND FELL INTO IT HIMSELF! Let this be a lesson to those who call this man “papa”. Oh, and one more thing- I HOPE YA’LL DON’T THINK THAT THIS LADY IS THE ONLY ONE THE HE’S HAVING SEX WITH IN THE CHURCH!

False Prophet/Teacher Kofi Danso Teaching on “Secret to the prophetic”