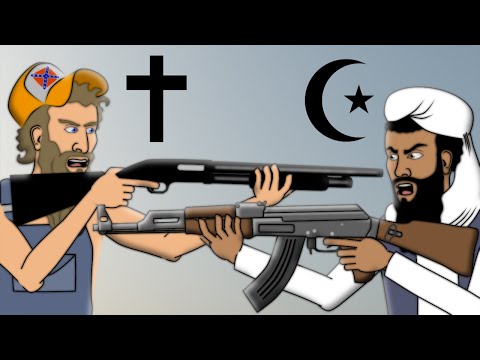 It’s funny how Christians can attack EVERY OTHER RELIGION besides Christianity! (Mathew 7:3 And why beholdest thou the mote that is in thy brother’s eye, but considerest not the beam that is in thine own eye?). Radical Islam is terrible indeed just as radical Christianity is. The KKK ( Klu Klux Klan) is an example of radical Christianity that sees people of color as “less than infidels” just as the radical Muslims do but the Christians don’t want to talk about that! Most [if not all] of those Klansman will tell you they are Christian and are “carrying out the will of God.“Repent Amarillo” is another example of radical Christianity. Repent Amarillo is a militant Christian fundamentalist group whose antics have ranged from staging a mock execution of Santa Claus by firing squad to posting a “spiritual warfare” map on its Web site that cited a Buddhist temple, an Islamic center, gay bars, strip clubs and sex shops as places of demonic activity.  The “Army of God”, another example of radical Christianity (active since the early 1980’s) is a loose network of radical anti-abortionists with a long history of promoting terrorism and premeditated murder in the name of Christianity. The Army of God has published an anti-abortion training manual that offers instructions on bomb-making, arson and other ways to attack clinics. The group’s Web site praises a long list of Christian terrorists who have been convicted of violent crimes, including Paul Jennings Hill (who was executed by lethal injection in 2003 for the murders of abortion provider John Britton and his bodyguard James Barrett), Scott Roeder (who was convicted of first-degree murder for the 2009 shooting of George Tiller, a Kansas doctor who performed late-term abortions), Michael Frederick Griffin (who was sentenced to life in prison for the 1993 murder of Dr. David Gunn, an ob/gyn based in Pensacola, Florida), James Charles Kopp (who shot and killed Barnett Slepian, a physician who performed abortions, in 1998), Matthew Lee Derosia (who, in 2009, rammed his SUV into the front entrance of a Planned Parenthood clinic in St. Paul and told police that Jesus ordered him to carry out that attack) and John C. Salvi (who attacked a Planned Parenthood clinic in Brookline, Massachusetts in 1994, shooting and killing receptionists Shannon Lowney and Lee Ann Nichols and wounding several others).

Kingdom Identity Ministries is another example of radical Christianity and is one of the largest suppliers of so-called Christian Identity materials that present a racist interpretation of Christianity. Their products include training books, pamphlets, and Bible study courses. Their mission to preserve the white race encourages white women to reproduce only within their race and encourages the superiority of the white male as interpreted from the Bible.   America’s Promise Ministries is another radical Christian group that relies strongly on the literal interpretation of the Bible. This church also insists that Jesus was white and believes that all greatness achieved in the United States is attributed to the work of the white race and none other. Several members of this congregation have committed violent acts of terrorism and murder, including abortion clinic bombings, bank robberies, and shootings.

There’s NO “right” religion because neither Yahua or His son Yahshua formed ANY them, they are ALL man-made, including Christianity. The Sharia law AT LEAST is nothing less than the enforcement of keeping moral laws but in this country that claims to be “founded on Christianity [whatever that means]” there is NO ENFORCEMENT of keeping moral laws, much less what’s written. People who identify themselves as Christians support EVERYTHING THAT’S EVIL… abortion, same-sex marriage, organ harvesting, church pimping, sexual immorality, telling “white lies”etc. and this evil began in the 1st century with Simon Magus during the time of Christ. No, Im not a Muslim- I’m not affiliated with ANY religion, I AM FREE to worship God in truth and in spirit with no religion involved that would take me off of the path of righteousness and keep me from speaking against and opposing all evil. But to all of you involved in religious wars, remember this- “And if a house be divided against itself, that house cannot stand [Mathew 12:25]…And if a kingdom be divided against itself, that kingdom cannot stand [Mathew 12:24} .. Those “houses” and “kingdoms” are in reference to different religions. ALL RELIGIONS are divided which is why there are various denominations or sects of EVERY RELIGION in existence, and according to Christ NONE OF THEM WILL STAND! Not even Christianity. If any Christian says that he/she wants to “expose deception and turn people to Christ” he/she can began with looking into the origin of Christianity and all of the filth and evil associated with it.