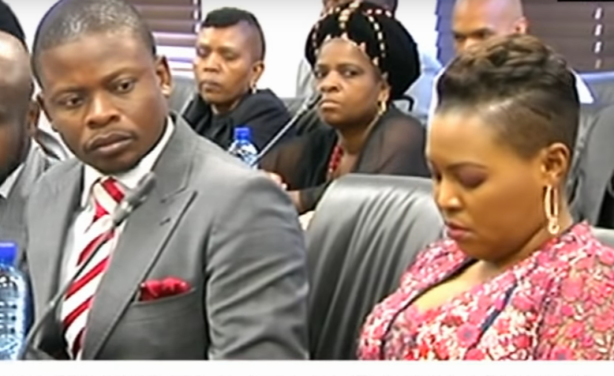 False prophet/occultist Shepherd Bushiri spent five days in jail over fraud and money laundering charges, and had his private jet confiscated following allegations that he fabricated loan agreement papers to acquire it. Now the Enlightened Christian Gathering church leader, based in South Africa, is accused of treating the church “like one big bedroom”. Allegations of sexual abuse and illicit affairs have always circulated around Bushiri but unfortunately he managed to bribe and threaten his accusers causing many of them to publicly recant their stories.

As South Africa’s most vibrant, recognizable civil rights movement, #NotInMyName has been approached by women – former and current congregants – of the Enlightened Christian Gathering who, in strict confidence narrate their ordeals at the hands of the so-called man of God and his many ‘lieutenants’. Recounting her experience, one woman described the ECG as “one big bedroom”.

#NotInMyName is a responsible mass-based organization which is always calculated in its approach. Before sending a public warning, repeated and subtle efforts have been made to warn the ECG leader, Shepherd Bushiri to desist from his uncouth behavior and tendencies.

‘In a country like ours, overwhelmed by sex pests and sex-for-jobs perpetrators like Timothy Omotoso of the Jesus Dominion International church, William Emeka of the God Is Love Ministries church, Jabu Ndaba of the Trinity Apostolic Church – #NotInMyName hereby sends a stern warning to Shepherd Bushiri [or whatever his real name is] that we are coming for him.

The recent protests seen outside ECG church following the death of congregants will look like a Sunday kindergarten outing if Bushiri does not come clean, and reform’. States a #NotInMyName spokesperson.

At the CRL Rights Commission hearings, #NotInMyName was in attendance, monitoring Bushiri as he dazzled the Commission with his prepared speeches and charismatic smiles. There is absolutely no dispute about the ECG church’s significant contribution to the economy in Tshwane – through what is being termed religious tourism. The large crowds that converge at the Pretoria Events Center provides a business hub for numerous people of Tshwane – from vendors to the hospitality industry.

However, any suggestion that the ECG leader is deemed “untouchable” would be utterly ludicrous, and an insult to the hurting women.

#NotInMyName urges other women in South Africa and abroad who have experienced sexual abuse of any magnitude from ECG to speak out.  #NotInMyName is also fully briefed by poor South Africans who allege that they have lost significant amounts of money in financial schemes that are run within the ECG establishment. In due course, our people will rise to recover what they have lost.

I have ONE QUESTION for all of the so-called “prophets” out there…. Why didn’t you warn the people about this monster? You’re on Social Media telling everyone who’s pregnant and who will win the next basketball game while there are innocent people being murdered and sexually abused by this occultist Bushiri. There are many so-called prophets who have visited this monster, who have invited him and his wife to their churches, who have accepted and exchanged gifts with him and you mean to tell me that God didn’t give you not even ONE DREAM concerning this despicable sex fiendish murderer?  Especially Benny Hinn who seems to LOVE these sociopaths! What I find to be even more disturbing are the false prophets who are now having visions about Shepherd Huxley since all of this publicity of his recent arrest and allegations. Shame on you all!

Bushiri Is Told To GO And Never Come Back!

2 Things That Occultists Disguised As Prophets Wont Do